All of us here at the Sugar Pine Mine would like to say an enormous THANK YOU! to all the guys and gals from the Oregon State Fire Marshal's Office, the Oregon Department of Forestry, the U.S. Forest Service, and the National Guard, for the incredible job they did protecting all the mines and homes in the Galice Mining District.

They even wrapped our cabin, mill building, and our infamous Stamp Mill in fire-proof Mylar sheeting to protect it from the fire!


The Taylor Creek Fire came very close to our mine infrastructure - it actually burned into the southern end of the Sugar Pine Group. Fortunately, due to the hard work and diligence of ODF and the State Fire Marshal, none of our structures were destroyed.

Thank you so much for all that you have done - you guys rock!

Stay safe our there, and God bless and keep all of you. 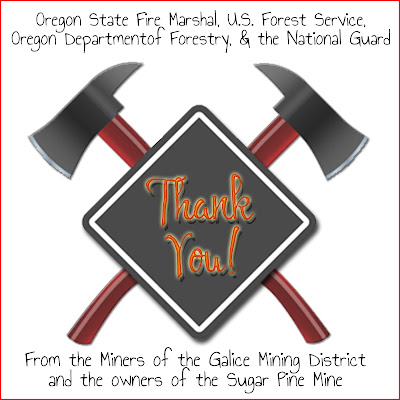 The following screenshots are of posts from an internet forum that we believe is frequented by disgraced and compromised federal government employees, sentenced to this purgatory for their wrong-doing.

The website, The Fog Bow, has a sordid history and has been used at least once to justify Probable Cause that resulted in an innocent man being jailed for 4 years.  The owner / founder of this website, is a wretched little man - reported to be an alcoholic and drug-addict.  He is a disgraced former attorney whose charges were so egregious, he had to step down from the California State Bar. The website has a well-documented pedigree and was literally set up by staffers in President Obama's White House in order to debunk what was known as the Birther movement - a group of people who did not believe that Barack Obama was a natural-born American.

I'm not going to send them traffic by linking to their digital hovel - you can look them up if you're interested in hanging out with the pitiful creatures.

These screenshots are of posts made on that forum by the instigator of the Sugar Pine Mine Incident - under the screenname Cato - who tried to steal the Stamp Mill on one of our claims.  I will rebut each claim and lie with the truth, as always.

"I am directly involved in another of these standoffs, and have received zero support from the agency I work for."


Contrary to Cato's claim, the BLM actually covered-up his crimes against us and put the entire entity of BLM in legal jeopardy, the outcome of which will reverberate through the halls of the Bureau for decades to come.

There was no "standoff," of course - this is over-wrought nonsense to make himself sound like a victim.  The reason he was "involved," in the Sugar Pine Mine Incident is because he started it!  Trespassing on a Pre-1955 mining claim with Surface Rights and attempting to steal items of personal, private property that are legally conveyed, and actively trying to put our mine groups on the National Register of Historic Places.

His "zero support" claim is absolutely laughable. Quite the contrary.  BLM have gone to extraordinary lengths to cover-up Cato's crimes.  Naturally, they don't give two hoots about a lowly Archaeology Technician, but we have it on good authority that the BLM will commit a multitude of sins to cover up a single lesser indiscretion...because that's just how they roll.  They're not overly-endowed in the smarts department.

The following post would have made us roll with laughter if it had not been touch-and-go for our caretaker who was investigated by the Josephine County District Attorney.  Cato made a false police report to BLM Law Enforcement, claiming that he had been -

"...held up at gunpoint by these sovcit fucktards."

Firstly, we don't ascribe to the Sovereign Citizen philosophy.   It's a great way to make one's life more difficult.  And further, it is idiotic.  Not sure where he gets that from, except, he labels everybody who doesn't agree with him a "SovCit," a "Nazi," a "fucktard"  or a "douchebag."  And for the record, we're none of those things, nor are we "anti-government" either. Quite the contrary!  We've spent that last 3 1/2 years begging BLM to do their job and follow their own regulations.

Further, we're actually Federalists more than anything else - the Federal Government is where our Granted Right to mine comes from.  Why would we be anti-Government? We're not.  This is a silly fallacy shoved down the throats of the public by people with an agenda, like Cato.

Note his signature line too -


And he does. That's exactly what this guy thinks.  He's not joking either.  Sounds like he's a little bit anti-government to me.

Cato spends much of his time online attacking the Bundys, laughing at the death of LaVoy Finicum, and ridiculing his widow and children, saying things about them that I will not repeat.  There are other online accounts that we believe he takes part in - but we can't prove that as yet - where the disgraceful rhetoric is to such a degree that he could justifiably be called an "anti-government extremist," or "seditionist," terms he and his federal co-workers and traitors love to use so liberally.  We may also be talking Hatch Act violations.  The investigation continues.

Sadly for Cato, the fact that he is identifiable as a federal employee and says so explicitly, even mentioning the agency by name, is contrary to the DOI and BLM Social Media Policy, and may lead to disciplinary action.

"...the BLM hasn't done shit to stand behind me. In fact they completely covered up the event and denied it happened to the media."


This is so ridiculous.  They completely covered-up his crimes in order to save the agency embarrassment and attempted to subvert their liability -  they figured we're just a bunch of ill-educated, blue-collar, non-college educated, redneck douche-bag miners that would never be capable of piecing together their conspiracy against us.  Oops!

"I love my job and I'm proud to serve, but I have learned as a BLM employee, no one has your six."


I would sincerely doubt he is proud to serve.  This dangerous liar serves no one and nothing but his own sociopathic id.  He does love his job, though - destroying lives, attempting to steal property, filing false police reports, smear campaigns, reckless endangerment, defamation, libel, etc. He's so happy in his work!

This charming little exchange was between "Cato" and another Fog Bow member.  Obviously triggered by the board member's audacity of not fawning over him, he resorts to expletives, like this little gem -

"I edited it to put FUCK YOU at the end." 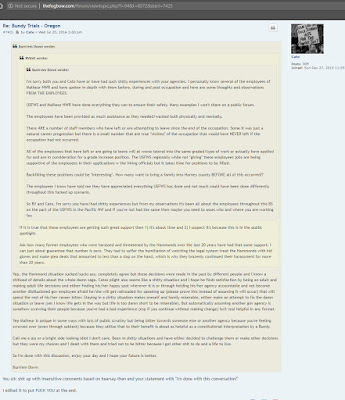 For which he promptly received chastisement from a forum moderator -

He only made a handful of posts after this exchange, then retired Cato, the anti-social sociopath internet troll.  (He does, however, have others.)  Fog Bow dislikes in-fighting on the board - they need all their vemon and vitriol for their political opposition, like people completely innocent of any wrong-doing that they conspire against to have SWAT-Teamed and incarcerated.

The moderator made the following statement -


"STOP POLLUTING THE BOARD WITH YOUR ANGER."


Not sure that polluting is the right word.  How does one pollute a fetid cesspool, overflowing with wretched people who use it to spread hate and discontent?

At this point, after everything we have witnessed happening online and in the media, some tough questions need to be asked  -

Has this behavior been fostered and encouraged by the Department of the Interior / Bureau of Land Management?

Is this a regional Troll Tag-Team, or does its reach stretch across the country?

Do these local Archaeo-Nazis liaise with the BLM Trolls from Nevada, the ones who suggested there was a SWAT Team on its way to raid the Bundy Ranch? (This was the very reason Cliven Bundy put out a call for Patriots to come to his aid in the first place - essentially entrapping him into the stand-off.)

Are the New Mexico gang of BLM Thuggees liaising with the Oregon Stamp Mill Collectors?

(As an aside, several BLM Medford employees worked in the New Mexico / Arizona regions before being shipped off to darkest Oregon, including Cato.)

These are not unfair questions and they deserve an answer.  Surely one of the feds crawling all over this blog right now know the answers.  Yeah, I know - won't hold my breath.  But it doesn't matter - I already know the answer to all those questions.

This display by Cato, the Medford District AML Unit Monarch is just a minute example of his behavior.  The outrageous, dangerous and vicious lies he told about us to the world are under wraps for the moment and being kept for another purpose.  All will be revealed in due course.

In the meantime, lest we get Waco'd or Ruby Ridged, all of us at the Sugar Pine Mine would like to affirm that we are all of painfully-sound mind, and in rude health.  None of us would ever take our own life, nor commit an act of violence against any human being.  We are peaceful, law-abiding citizens who have been mercilessly attacked in several different ways by a rogue, seditious agency that does not work for this government, nor the people of this country.