Below are scans of the documentation regarding the Sugar Pine Mine.  We want 100% transparency and for everybody to be able to see our paper trail quest. Obviously, we are not releasing ALL our evidence - we're keeping the REALLY tasty stuff for court! But what we do release here will be enough to conclusively prove that we control the surface and it was not legally conveyed to BLM.

We'd like to point out that we have repeatedly requested that BLM sit down with us and look over our conclusive proof of surface control. They refused. They were not interested in what is legal or just. They just want the Sugar Pine and always have. Unfortunately for them, we're not your average miner who isn't aware of things like Surface Rights and Pre-55 status. But that's not surprising, since they OWN EMPLOYEES are ignorant of the Surface Resources Act of 1955. They're not even taught of its existence. That would be because they IGNORE the laws of this land and do as they please.

We have sent fourteen (14) FOIA (Freedom of Information Act) requests to BLM in order to procure the documentation on the Sugar Pine Mine.

So far, they have only responded to three (3) FOIAs, but sent only computer discs, and NOT the CERTIFIED COPIES that were requested.

We apologize for the quality of the documents from BLM.

This page will document the following -

According to Jim Whittington at BLM Medford District, they are supposedly in possession of a document conveying the surface rights of the Sugar Pine Mine to BLM.  This document is below, and proves that BLM's claim to the surface is based on NOTHING.

The document below is a 'verified statement withdrawal' by Jack Gordon and is supposedly BLM's 'smoking gun' that they control the surface to the Sugar Pine Mine.

This document was obtained from BLM geologist, Diane Parry, and was later provided in digital format in FOIA #Or-2015-039 as the document which Parry gave to Sugar Pine Mine co-owner, George Backes, as proof of BLM's surface control.

The statement Jack Gordon was 'withdrawing' was in a previous document where he exerted the surface control of the Sugar Pine Mine.

First problem with this withdrawal of that statement is that Jack Gordon (whose signature is allegedly on this document,) was NOT THE OWNER of the Sugar Pine Mine at this time. This document is from 1963. Jack Gordon did go on to own the Sugar Pine, but not until 1969. He had no legal authority to relinquish rights nor convey ownership to BLM or any other party.

Secondly, this is NOT A LEGAL DOCUMENT 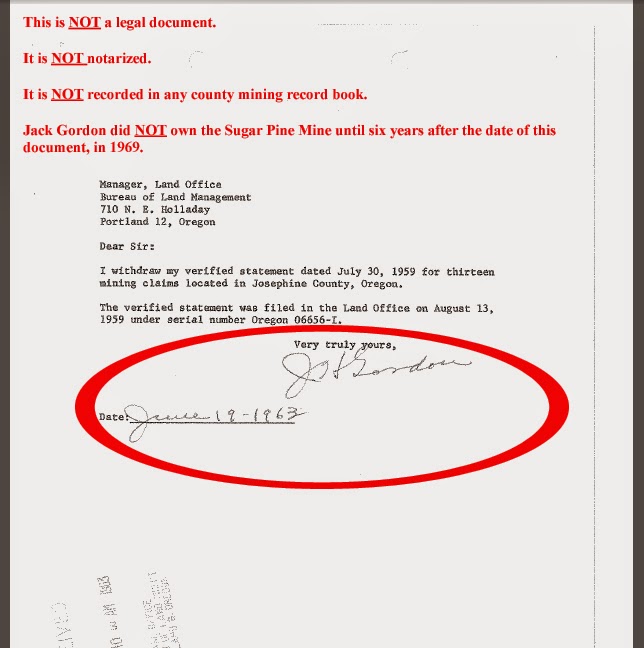 ORS 93.410 - Execution and Acknowledgements of Deeds -


"Requires that any deed or transfer of property shall be signed by the grantor and shall be acknowledged before a judge, a justice of the peace, or a notary public within the state."

This is NOT signed by the grantor. The owner of record at the time of this document was Evelyn M Allen Niebel.

Jack Gordon took ownership of the mine from Evelyn M Allen Niebel on 17th November, 1969.

In a telegram to Jack Gordon, written by Evelyn (from Santa Clara County, Ca where her conveyance to him was notarized) she wrote -


"I hope he makes his million out of them."

He was too busy fighting BLM. 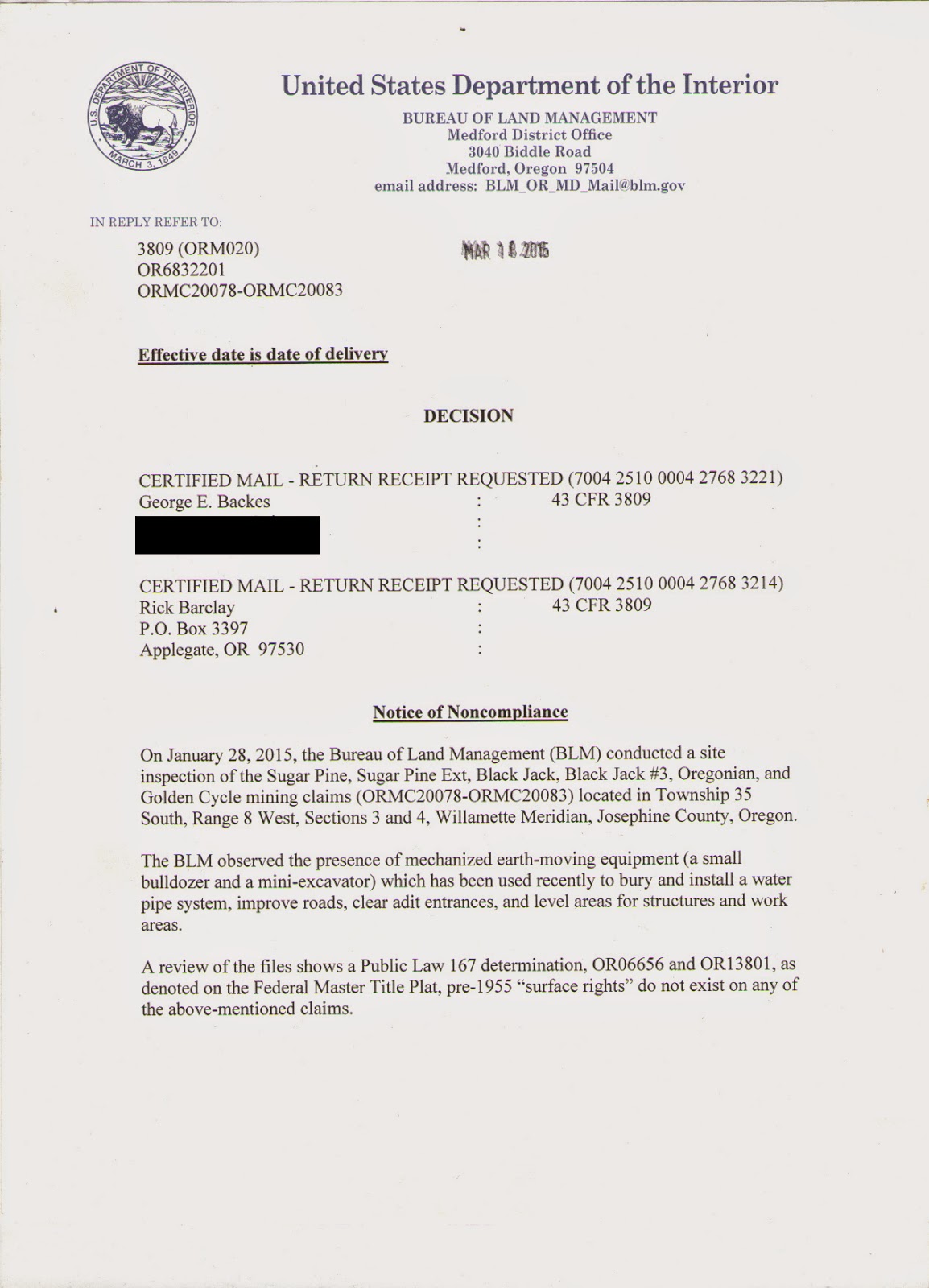 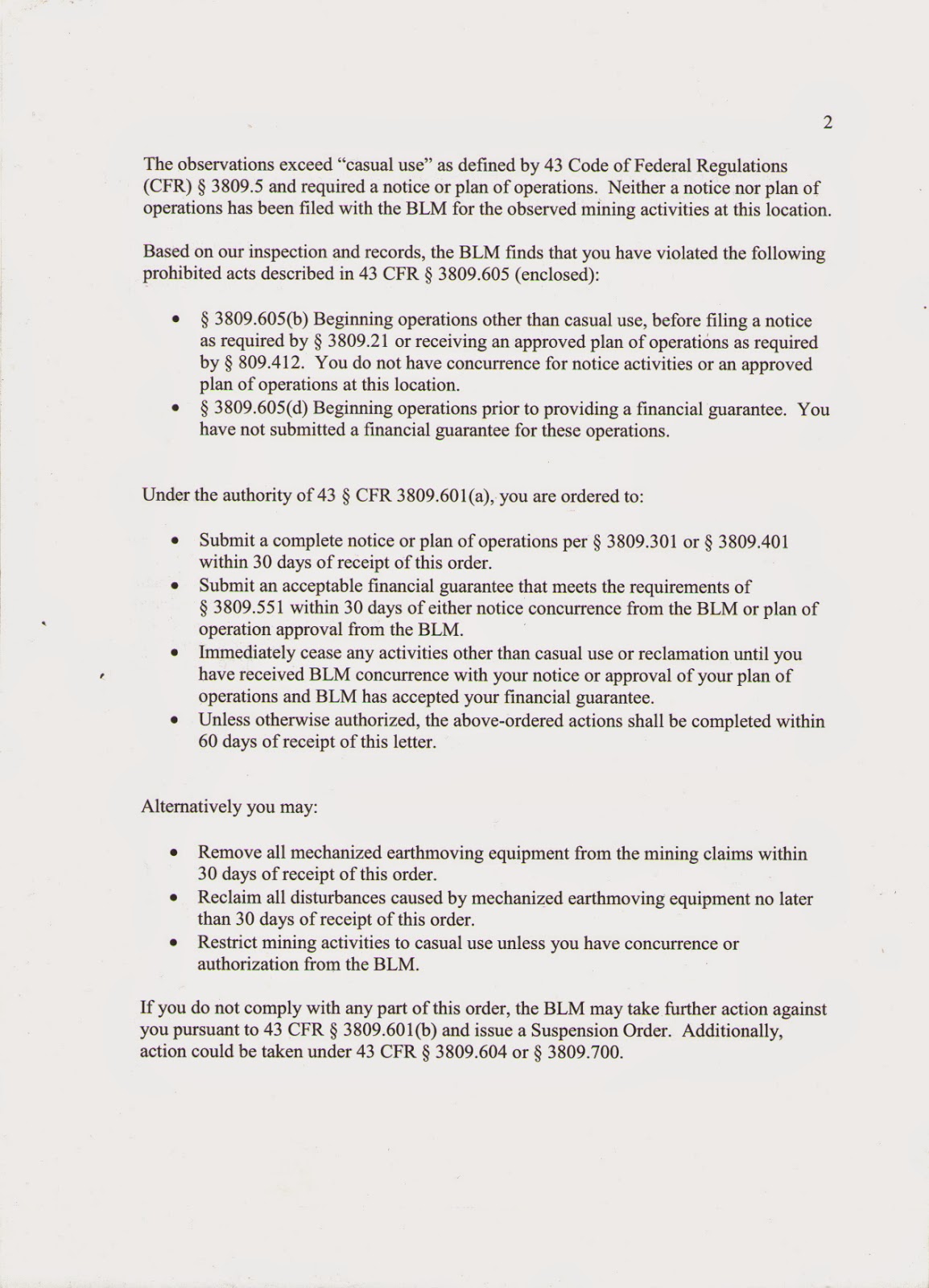 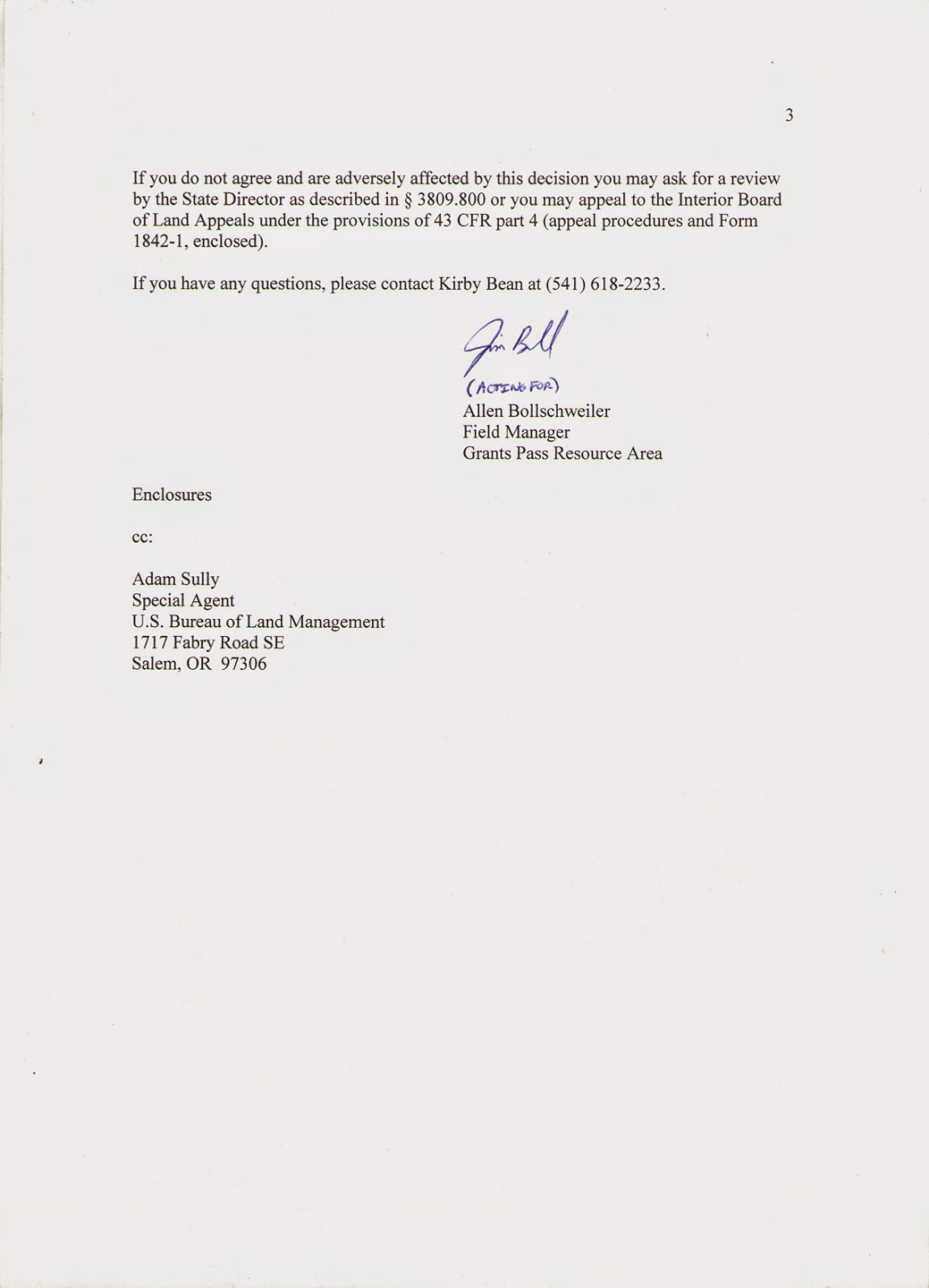 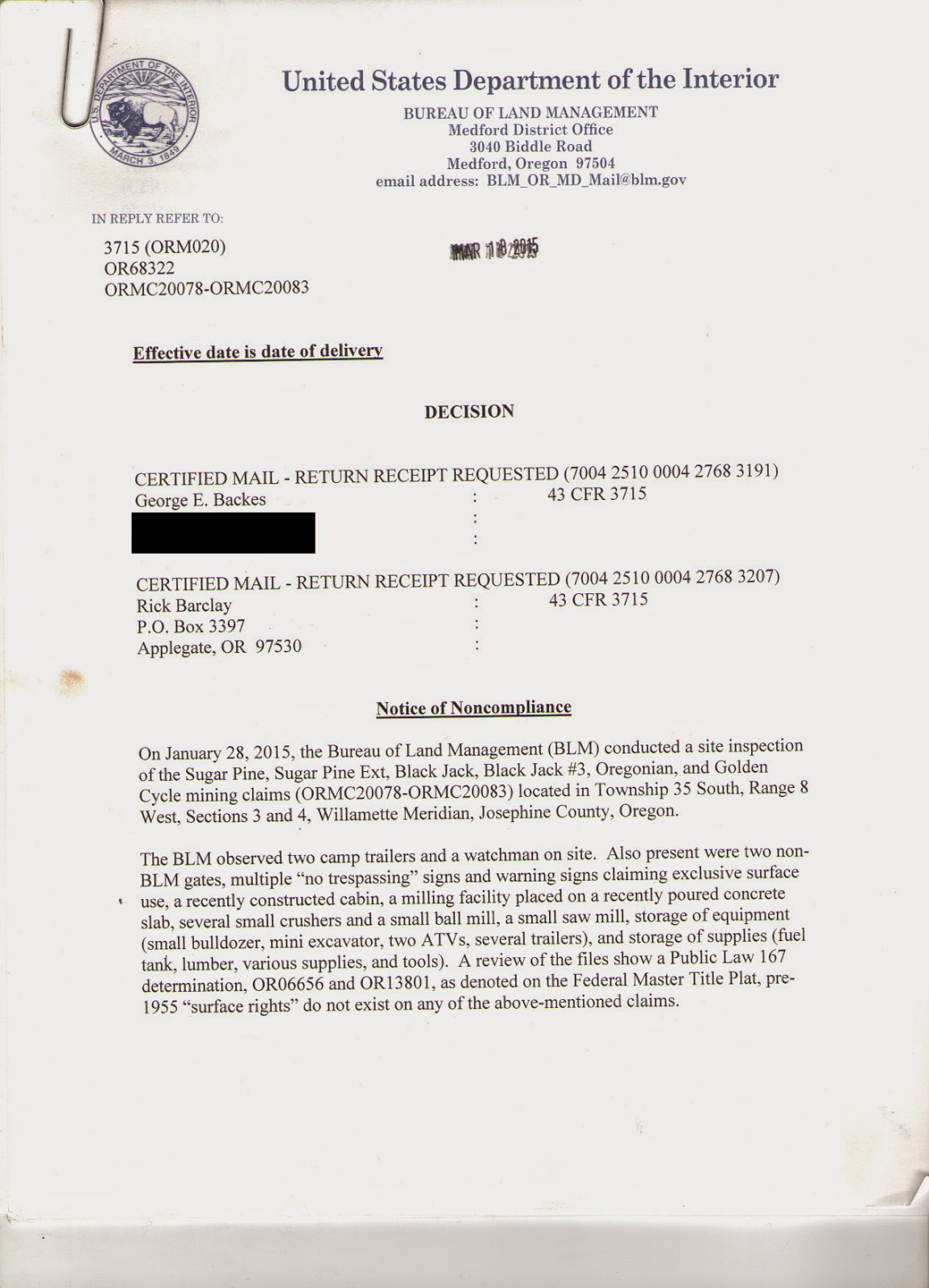 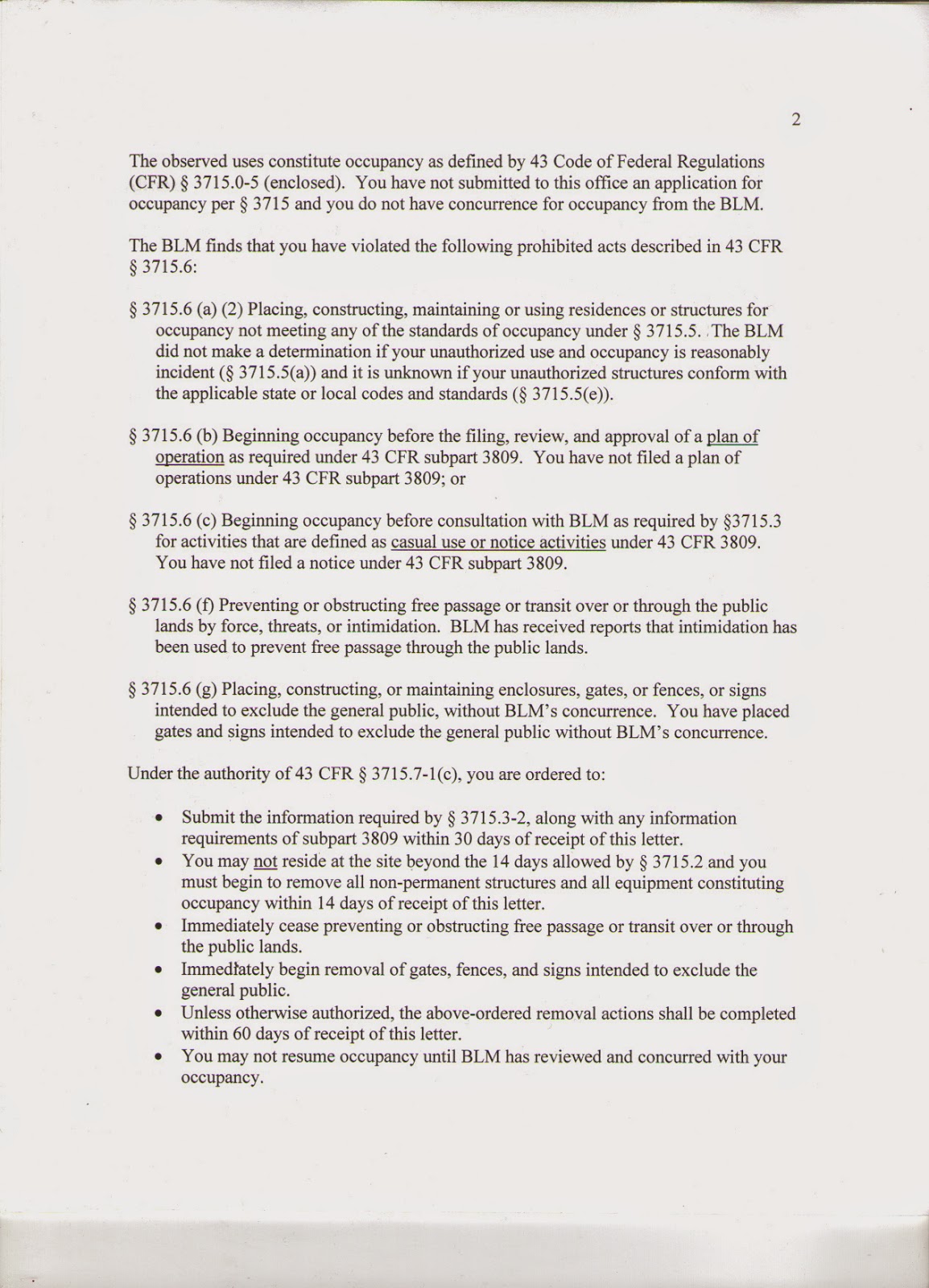 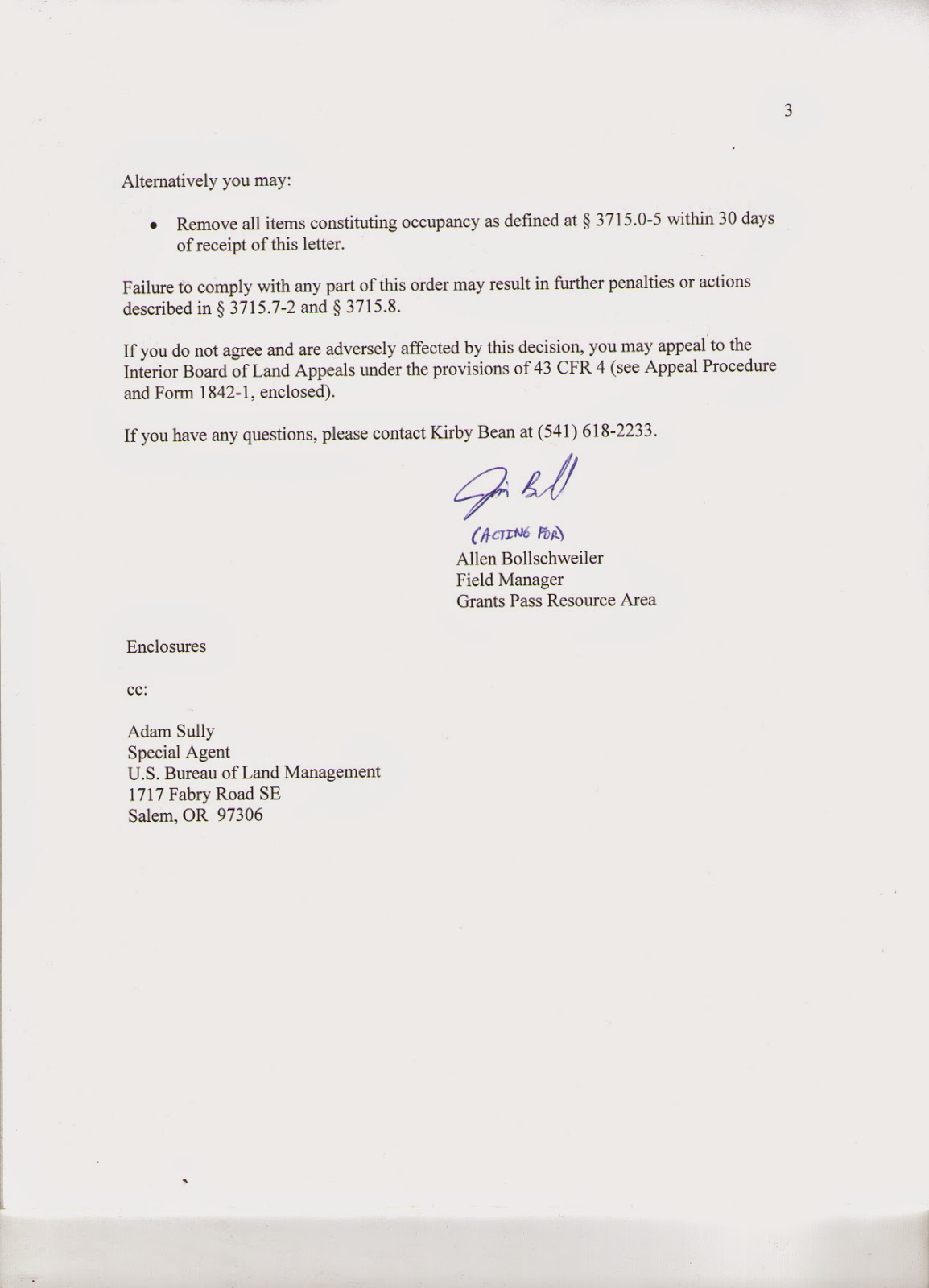