It made us so sad to discover that BLM could, indeed, sink even lower than we thought possible. Although I know the disgraceful lies the Bureau of Land Management Medford District former PAO told the public, the fact that they would lie about threats to federal employees they claimed were related to the Sugar Pine Mine goes beyond agency propaganda.  This is despicable.  This is outrageous.  The BLM are nothing if not dirty fighters. 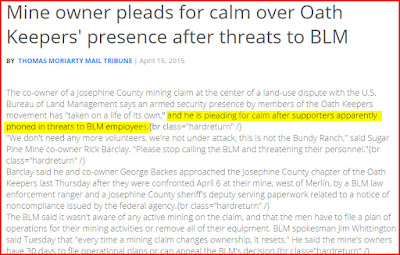 This is an utter lie.  And I won't give this trash traffic by linking to it.  Or this other piece of garbage from George Soros and Ford Foundation funded operatives, Political Research Associates...

Want to know what that was all about?  The BLM staffer who was "followed home?"  The guy in Threat No. 1 (below,) asked his neighbor if she needed any help carrying her groceries.  I kid you not.  Unfortunately, she was the wife of the silliest, most paranoid little man who ever worked for BLM.

Perhaps these people who work for BLM are so deathly afraid of everyone, anyone, and anything, is because they know what they did.  Of course, it doesn't help matters when BLM draft in a Field Manager from another office (one with a personal grudge against one of the miners, from way back) to spearhead the campaign against the Sugar Pine Mine.  He spent months terrorizing his own staff, making them afraid of their own shadow, and had them believing everybody in the woods wants to harm them.  There were even members of staff who refused to turn up for meetings they were so scared.  This is what BLM will do to win - anything.

For the entire Financial Year of 2015 there were a total of 28 so-called “threats” against Bureau of Land Management employees – ACROSS THE WHOLE COUNTRY. Only four of them took place in Oregon, I can tell you exactly what each incident was about – and none of them involved an actual threat to a BLM employee. They consider challenging their authority to be a threat. This was a lie told solely to smear the owners of the Sugar Pine Mine, and turn public opinion against them.

BLM's besties – SJWs and radical environmental groups, ran with the agreed narrative and Talking Points, and began a very vocal, public smear campaign against the miners and their supporters.  (We'll be seeing these folks in federal court in the future.)

Those local enviro flakes and nuts even teamed up with the Southern Poverty Law Center, the biggest Hate Group in the world, in my opinion, and the Center for Biological Diversity – puppets of a vile Swiss billionaire who committed sick, violent sexual acts on an employee, and whose corporation carried out illegal medical experiments that killed Americans. You would not even believe some of the things we have had to endure – all directly related to the lies BLM told the public.

The image below is the complete list of “threats” the Bureau of Land Management received in 2015, then an annotated version is below it.

THREAT No. 1
This was a letter sent to a Mineral Leasing Specialist in Washington D.C., who the writer was familiar with, about his own mining claims. She had a conniption-fit when she read what his occupation was. He takes care of cleaning up accident scenes. She immediately informed somebody at BLM OR/WA and inquired about taking “action” against him as she construed this as a threat.

THREAT No. 2
This was a completely unrelated incident. A resident in the Applegate Valley expressed his chagrin about to a BLM Survey Crew who were trespassing on his private property.

THREAT No. 3
A team of BLM contractors monitoring the activities of the Northern Spotted Owl were trespassing on a patented property in Galice while searching for the moldy old winged rat. They were confronted by the owner who told them his land was patented, that they were trespassing and he would like them to go.  They told him they can trespass on his property if they want - they were way beyond any easement. He fired one shot in the air to persuade them to leave.

THREAT No. 4
The Sugar Pine Mine caretaker was startled by two men tearing around the claim on ATVs, interfering with items and equipment. They had not identified themselves. They were not in uniform or in any way identifiable as agency.

The caretaker called George, co-owner of the mine, who asked him to block the road with his car and find out who they were. He did. They finally told him they were BLM Archaeologists, which made him relax and even apologize for blocking the road. Then one of the pair - a sociopath with a fetish for miniature models of narrow gauge railroads and Stamp Mills, just couldn't let it lie and began ranting about 1872. It doesn't take much to trigger him, apparently.

Soon after, BLM Law Enforcement began to mercilessly harass and threaten the caretaker with a “grand jury” and “the D.A.,” if he didn't dish the dirt about what was going on at the Sugar Pine Mine.  Bear in mind, all this was three months before the Oath Keepers moved on to the mine to secure the property and personal belongings.

We now have reason to believe that the Archaeologists from the Abandoned Mine Lands Unit (who apparently need to look up the definition of abandoned,) made false police reports about being held at gun-point, something one of them has repeated several times on internet forums. It should be noted that a report by one of them regarding the site visit that day – which was actually to carry out their Monitoring Project on the Stamp Mill, a conveyed item of personal property – omitted any details about being held hostage or having a gun pointed at him, which you would think might stick in his mind...if it happened. Which it didn't.

This is the toy train guy's report on his visit to the mine that day.  (The only reason I redacted the names is because BLM will accuse me of endangering the evil Stamp Mill-stealing wretches.)

Watch the video below to hear the caretaker describe his persecution at the hands of BLM Law Enforcement.

After the miners complained about the Indiana Jones wannabees-but-never-weres trespassing on a Pre-1955 mine with Surface Rights, and informed BLM they would file suit against them in federal court, all of a sudden Law Enforcement were all over the caretaker with their threats and even attempted to have him prosecuted (which the District Attorney thankfully declined to do,) and two noncompliance notices were immediately issued for the mine.  Did the DA investigate the allegations and find them to be false?  Did he discover the full extent of the BLM cover-up about what they were trying to do to the Sugar Pine Mine?

It should be noted, strangely enough, the harassment of the caretaker didn't begin until around a month after the trespassing AML Unit had their little hissy fit.  A letter asking for BLM's proof of surface severance was sent, (the one which included notice that they would be sued if they tried to take the mine,) and we started to send FOIA requests, which were sent in an attempt to obtain documents that would prove they had the surface.  There were none.  They did not sever the surface of the mine - and they knew it.  Regardless, the continued with their assault against the mine.  They were repeatedly asked for proof - we had no desire to go into IBLA or federal court to find they had proof of surface severance.  Of course, BLM thought we were looking for documents to prove our case because we're just dumb miners, uneducated rednecks, and illiterate oiks, when, in fact, we were looking for evidence that would prove theirs.  Our goal was always to find the truth, and walk away if we were wrong.  We were not wrong.  We were right.  And we have proven that.

Months later BLM were still looking for documents to disprove our position.  They have not found any to this day.  There is absolutely no documentation to support their claim of taking the surface.  Their own court - the Interior Board of Land Appeals - suggested during the legal arguments that BLM provide the court with some documented proof of their claim of surface severance.  Their response?  They challenged their own court's jurisdiction!  This is especially ironic, after they told the world that IBLA was the right place for this case to be heard.  Of course, that's not true.  They knew they were going to be sued in federal court and used their noncompliance notices to subvert that, tying us up for years in their own internal system.

BLM have repeatedly lied in order to turn supporters and the general public against the miners. Unfortunately, many people are more than willing to gulp down that agency Cool-Aid and babble nonsense about Public Land, something they have no understanding of. BLM will stop at nothing to impose their will, even to the extent of ignoring their own regulations and Federal Laws. They will even lower themselves to spread lies and launch smear campaigns against members of the public, just because they didn't get their way.  If that doesn't work, they'll tie you up in their Fourth Amendment-subverting Administrative Court - where we still are, three and a half years later, with no decision from the IBLA.  We hope this is because the court are doing a thorough job with their decision, and that after this case, BLM will no longer carry out assaults on mines or private property. We can only hope.

Make no mistake – the Bureau of Land Management is completely out of control. It is a force of insurrectionists in this nation that will take your rights, take your belongings, burn down your home (or make you burn it down yourself,) attempt to taint your name and reputation with abject lies, send pill-addled junkie informants to steal your money, and...what else? Could there possibly be more?