How Much Is This BLM Land Grab Costing YOU, the Taxpayer? Ask them!

Are you wondering how much this latest Bureau of Lawless Mobsters attempted land grab is costing YOU, the taxpayer?

You should ask them!  You'll get quite a shock.

A couple of years ago, USFS decided to endlessly harass another miner, named David Everist, who lived out in the woods in an old trailer on his claim. They prosecuted him for removing a DEAD TREE, littering, and not having a plan of operation. Dave mined with a sluice box, a shovel and a gold pan.

This number was obtained via FOIA documents procured from USFS by David Everist.

Yes, you read that right.

ELEVEN AND A HALF MILLION DOLLARS.

Can you even imagine how much the Sugar Pine case is costing? Public relations specialists being flown in from DC, the team of lawyers, the cost of all the Homeland Security and FBI they've brought into the area, apparently for YOUR safety (from what I do not know.)

And all because they wouldn't sit down with us and allow us to present the abundance of proof we have of our surface control.  They were given the opportunity to do the right thing, numerous times. They refused. Repeatedly.

Diane Parry, BLM Geologist for Medford District, arranged a meeting with us and decided not to turn up, claiming to be sick, and instead sent her assistant and an obnoxious constitution-hating Sheriff's deputy (BLM law enforcement). We actually had somebody else call her office and ask to be put through to her. They WERE put through to her. She was NOT sick at all. She lied. So, you see, this isn't something that came out of the blue and we just decided to get Oath Keepers to protect our property on a whim. This has been ongoing for months. They just didn't think we would or could put up the fight that we have.

And now YOU are going to be made to pay for all of this with your taxes.

Seriously, you have a right to know how many millions they are spending on this frivolous case that they CANNOT WIN in law, because they are simply WRONG.


Whomever you talk to is unlikely to tell you anything more than you should file a FOIA request, for which they charge sometimes large sums of money.  (The cost to Rick Barclay, Sugar Pine owner, has already reached approximately $10,000, most of which is FOIA request fees for documents.)  But just making your concern known to them will send a message.

Did BLM Carry Out An Illegal Burn On Your Property or Claim? - Send In Your BLM Horror Story

Kerby Jackson, Sugar Pine Mine Spokesman, Archivist and Historian has publicly called for people to come forward with their BLM Horror Stories...


"Almost every long time miner I've spoken to has seen the agencies do their cabin burns and commit other crimes against miners. I want those stories and if possible, photos to go with them, even if it's just a pile of ashes. They do not have to have taken place in Oregon. Please send details to: BLMHorrorStories@gmail.com"

Have you had your house, cabin or mill building burned down by BLM?  Did they illegally take your mining claim?  Do you have a Pre-55 claim and they took your surface rights?  Kerby Jackson would love to hear your story.

Naturally we're particularly interested in mining-related stories, but anybody who has been aggressed against by BLM and strong-armed is welcome to send in their story, whether they are a miner or not.

Like Dale Matthews says in the video, "This is what all the fuss is about."  He says it with incredulity.  If you watch the video, you'll see why.

Dale Matthews (BadCounty.com) interviews the caretaker of the Sugar Pine Mine, Danny VanDerschelden.

Is BLM Spokesman Jim Whittington a Compulsive Liar? Does He Need Professional Help?

This video below is of the work done last summer at the Sugar Pine Mine, when they were mucking out tunnels.

According to Jim Whittington, Spokesman for Medford BLM, the mine has a -

"...fairly big footprint to it. There is no plan of operation that would cover the level of work they are doing there."


That's strange, since the following was the extent of all the mining equipment listed in their Notice of Noncompliance -

As you can see in the video, they were working at the Sugar Pine Mine the same way they would have when it was first claimed, over one hundred and fifty years ago, with a shovel, an ore car and lots of elbow grease. According to BLM's awesome logic, the Goldstrike Mine (above) is a much smaller mine since it has a Plan of Operation, you know, that thing the Sugar Pine can't get cause it's so enormous? 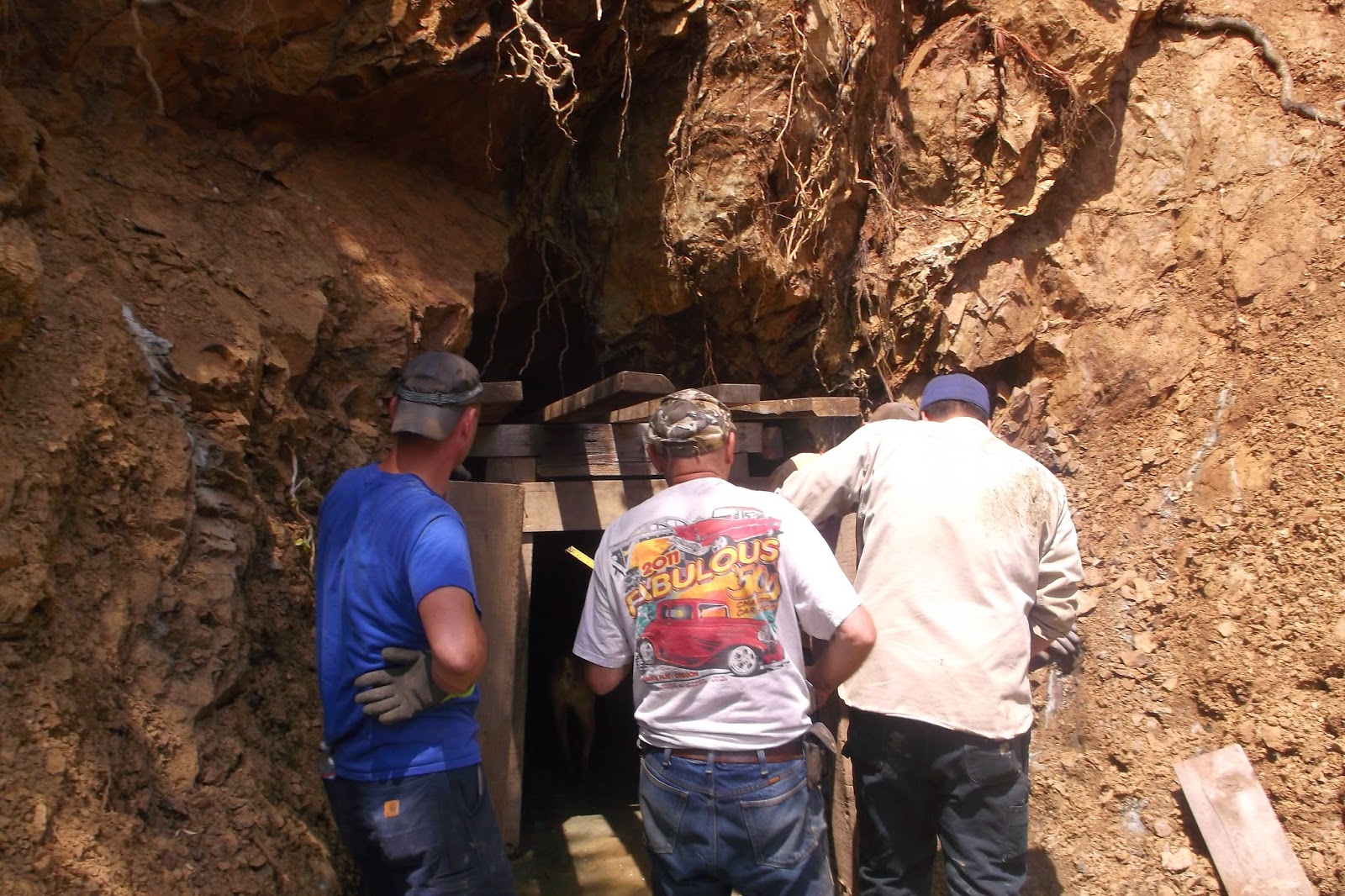 In case you were wondering, BLM are lying to you. Repeatedly.

The Twitter feed for the Sugar Pine Mine is now live.  Follow us or send us a message.  Use the details below or the Twitter widget to the right of this page.

Watch the video of Rick Barclay, co-owner of the Sugar Pine Mine in Galice, OR, interviewed last week on KDRV Newswatch 12.

WHERE - Your local BLM office

On Thursday, April 23rd at NOON (Pacific Standard Time), there will be a support rally for the Sugar Pine Mine at Galice Oregon at the Medford District BLM office. For those of you who cannot attend, we are asking you to gather and peacefully protest outside YOUR LOCAL BLM OFFICE. We are calling on all miners, loggers, farmers/ranchers and freedom lovers everywhere who are tired of government abuse to tell the BLM that the people of this country that they are sick to death of the way that they have been conducting themselves.

We'll see you there!

Go to BLM.gov to find your local BLM office.

Families Evicted, Homes Burned to the Ground by USFS

In 1990, Pulitzer Prize-nominated broadcaster and journalist, Shann Nix, wrote an article about the plight of miners living along the Salmon River in Northern California. At the time, Nixx was a staff writer at the San Francisco Chronicle.


The article, which ran in the newspaper on May 18th, 1990 was entitled Hardscrabble Miners Make Their Last Stand – Forest Service Evicts Families, Razes Homes. The article makes for a heart-breaking read. (We're hoping that the rights to this article have reverted back to Ms. Nix and are working on permission to reprint it in its entirety.)

[Note: Shann Nix responded to our request and told us she would have been happy to let us reprint her article, one that is so close to her heart, but unfortunately her former employer, the San Francisco Chronicle, still owns the rights to the piece.]


Nix interviewed miners and their families who had been evicted by the USFS (United States Forest Service,) who proceeded to burn down their cabins, leaving some of them homeless, with nothing, penniless without their claims to mine on, and with nowhere in the world to go. They even invited them all to a Town Hall Meeting where the miners and their families requested a moratorium on the burning of their homes, and whilst they were occupied, talking with the Siskiyou County Board of Supervisors, armed USFS employees burned down yet another home. They even bulldozed the rose bushes and burned the beautiful fruit trees that surrounded the house. With their Sadism knowing no bounds, they even ordered people to burn down their own homes, under the threat of arrest, fines and imprisonment.


There is NOWHERE that any LAW allows them to do this.


These land management agencies, be it USFS, or BLM, or whomever else, are simply lawless. They are nothing more than criminals. They commit arson, property destruction, and yes, even (alleged) murder, in the name of, well, in the name of NOTHING, except their own out-of-control egos and institutional arrogance.


Why is this tolerated by their superiors? Why? How can this be allowed to happen? Time and time again, over and over? How can they be allowed, by the government of this country, to act as they wish, regardless of the law, regardless of even their own regulations, and with impunity?

Is there anybody, anywhere who can answer these questions?


These guys (below) would know the answer, and no doubt, that answer would be because we can.


The following are quotes from Shann Nix's article -


“Every time the Forest Service removes a structure or a family, it's one less to deal with. And the big operations pay big bucks...We started to burn obviously abandoned fire-hazard type cabins with the permission of the owner, then it seemed to accelerate among the Forest Service guys. Who can burn more Cabins? Then it turned into a race. Before the public picked up on it, we had lost 25 – 30 structures. Then we started to plan it. We started to kick people out, so we could burn the cabins. I burned down cabins myself.” - Matt Olson (Retired USFS employee)


What is most disgusting about Mike Lee's statements is the fact that his own heritage is MINING! Check out the quote below, from Lee, taken from an interview which was part of the USFS Oral History Project, and conducted by Janet Buzzini.


“I was third generation Chinese to be born in Nevada County. My great-grandparents came to
Nevada County during the mining years, and my grandfather had a restaurant there, and my
father and my uncles and a lot of people worked in the mines.” - Mike Lee (Retired USFS District Ranger)


Those who have committed these crimes against hard-working, honest, generous people, in the name of absolutely NOTHING, and for no reason, other than they could because nobody ever stopped them, are an absolute disgrace to their families, to their government, and to their country – the country they have helped to destroy.

God bless America. May she rest in peace.

Interview with Sugar Pine owner Rick Barclay, at the very mine on which BLM has illegally issued a shut down order.
Posted by ~ Sugar Pine Mine at 5:14 AM

Below is the video of Kerby Jackson, Sugar Pine Mine historian and spokesman, being interviewed by David Knight on the Infowars Nightly News discussing the latest unlawful land grab by BLM in Galice, OR.

We are shocked to report, as of this date, BLM has still not complied with any of our fourteen (14) FOIA (Freedom of Information Act,) and has chosen to completely ignore us, in violation of yet another FEDERAL LAW (5 USC 552.)

BLM claim they want to 'communicate' with 'the miners.' We can categorically tell you, they do not.

What's Going On in Galice?

These websites are the ONLY places to find our what's really going on between the Sugar Pine Mine and BLM, without all the conspiracy theories, gossip and disinfo that's flying around the internet. When we say the ONLY places, we mean that.

We will also keep you updated with links to interviews, news stories and other relevant info via the blog on this site

For a more detailed answer, including legal arguments, CLICK HERE!